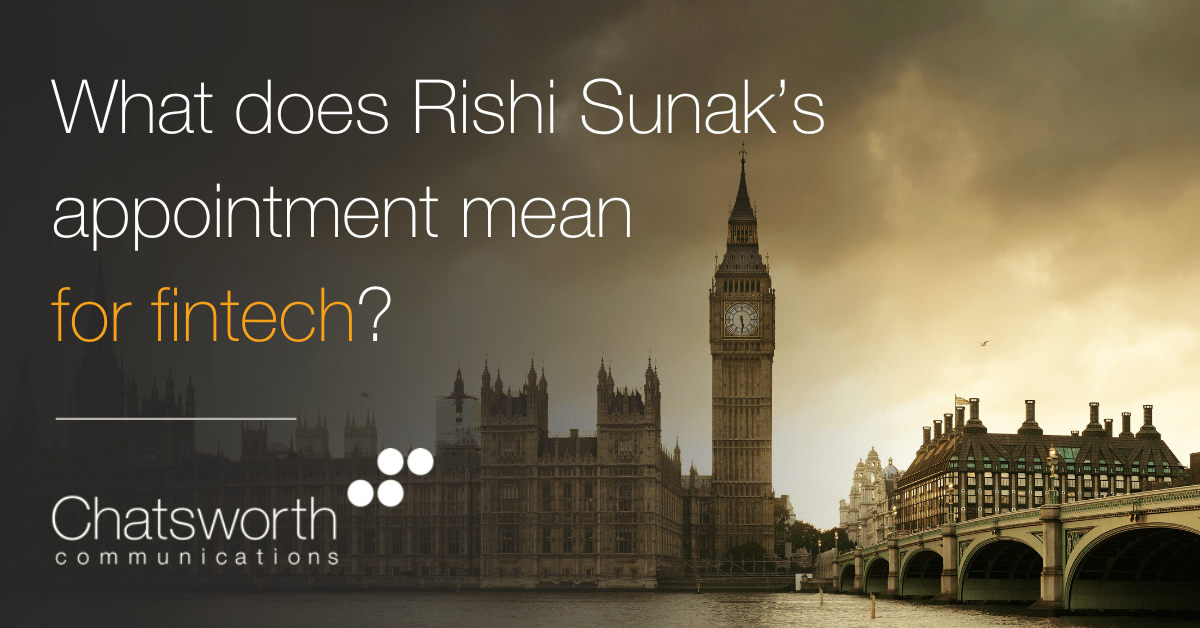 New prime minister Rishi Sunak has been an outspoken advocate for fintech growth, but what does his recent appointment mean for the sector going forward and how has the industry reacted to his leadership?

The initial reaction from the UK’s fintech industry has been one of cautious optimism.

Rishi Sunak has previously voiced his support for the fintech sector and introduced positive measures during his time as chancellor including the Kalifa Review which aimed to strengthen the UK’s position as a leading fintech hub.

He also unveiled a raft of initiatives to support the sector during last year’s Fintech Week, including new Financial Conduct Authority’s ‘scale box’ and a Centre for Finance, Innovation and Technology to drive growth.

David Brown, CEO of Hi, believes this could be a positive appointment for the industry as Sunak was, “very supportive of fintech,” when he was chancellor. He goes on to say, “during Fintech Week last year, he talked about boosting growing fintechs, pushing the boundaries of digital finance and making financial markets more efficient – music to many fintechs’ ears.”

During his time as finance minister, Rishi Sunak announced plans to make the UK a, “global hub for crypto.” Sunak was a key force behind the Financial Services and Markets Bill currently passing through parliament, which many industry participants consider to be a world leader in the push for crypto and digital asset regulation.

Under his leadership, the country’s coin producer, the Royal Mint, was tasked with creating a non-fungible token (NFT) collection, which has yet to come to fruition.

Ian Taylor, director of the industry lobby group CryptoUK, told CoinDesk, “it’s a positive for crypto and the general economy.”

Charley Cooper, Managing Director at R3, highlighted that the UK political instability could damage its ambition to become a crypto hub. He said, “It’s very hard to lure new businesses into such a volatile political environment because they’re unable to fully account for the risks.”

One of the biggest pieces of legislation in Rishi Sunak’s in-tray is the Online Safety Bill which was introduced in May 2021 in an effort to protect online users from abuse and fraud with a particular focus on children and the vulnerable. The attempt to reduce online harm draws parallels with several issues facing the fintech industry, such as combatting identity theft and fraud throughout the UK.

Martin Wilson, CEO of OneID, said, “It is vital that the UK government continues to support this legislation so it can continue to lead the way in holding social media firms to account, protect people from abuse, fraud and violence, and make the internet a safer place.”

Amidst a turbulent time for British politics, new leadership has the potential to provide some much-needed stability. Fintech funding in the UK has suffered in recent months and industry experts suggest consistency at the top could help show investors that the UK is open for business.

Brown said: “A slowdown in investment threatens to stifle fintech innovation in the UK and what the industry needs now is strong, stable leadership which helps the UK secure its place as a world-class fintech hub.”

R3’s Cooper said, “the sooner the UK’s political landscape stabilises, the more likely these firms are to take the next step of integrating these profound innovations into their services and business models.”

Rishi Sunak’s record has given the UK fintech community hope of future prosperity. Throughout his career, he has consistently spoken of the importance of supporting fintech and scientific innovation. The best way he can do this is to provide strong and stable leadership and tap into the UK’s work-class fintech sector.

Chatsworth was the first communications agency to focus on fintech. We’ve been building fintech reputations for 20 years, steering start-ups through launch, growth and onto corporate action, and protecting and enhancing established infrastructures. Looking for intelligent, informed and connected fintech PR which delivers results and value? Get in touch and let us help build your reputation and tell your story.