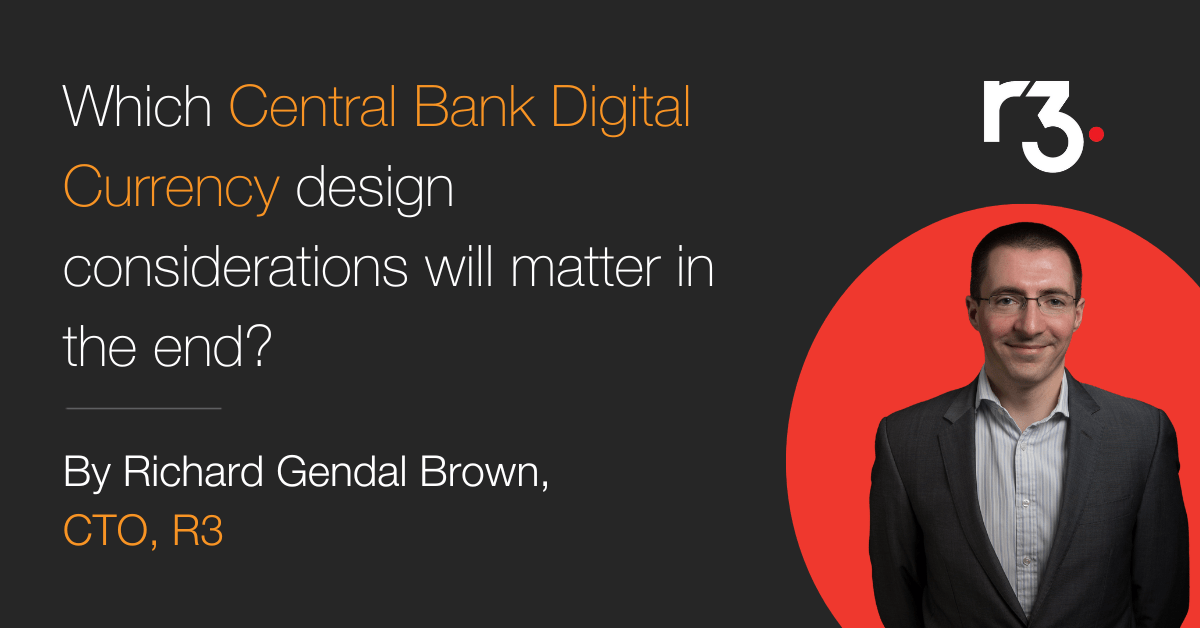 As Central Bank Digital Currency Development (CBDC) begins to move from the research phase to real-life building, I’ve spent a lot of time in recent months thinking about why a retail CBDC might be needed.

For example, if a country already has a sophisticated retail payment system, why would consumers voluntarily adopt a CBDC? What unique features would it need to have to make it attractive? Censorship-resistance perhaps? Privacy? Support for direct person-to-person payments? Ability to pay merchants even when the power is out? These questions are likely to have significant impact on the technical architecture of any given system, and so this is where I’ve been focusing.

But the danger in that approach is that it can feel impossible to make any progress at all until all these ‘policy questions’ are addressed. Happily, serious thinkers in central banks – and elsewhere – around the world have correctly identified that, irrespective of some of the deep questions above, it is still possible to make intellectual progress.

But first, what is a retail CBDC? In short, a retail CBDC is intended to be an electronic analogue of physical cash. That might seem odd when you first hear about it: isn’t that what a bank account with a debit card is? Not quite: money issued by a commercial bank is qualitatively different to money issued by a central bank, and there are things you can do with cash that no electronic system presently enables. This means that if cash declines to irrelevance, there’s a hole to be filled.

So, with digital currency pilots ramping up across the board, here we discuss three key design considerations that central banks and government bodies are using to frame their thinking when moving ahead with CBDC production.

How is the CBDC distributed?

There are three potential ways in which a CBDC might be accessed by consumers:

1. Direct model – this model is designed for disintermediation where central banks issue directly to end customers. This model can disrupt the current financial system and will put additional burden on the central banks in terms of managing customer on-boarding, know-your-customer (KYC) and anti-money laundering (AML) checks, which may prove costly to the central banks. But it would be the most obviously ‘cash-like’ product.

2. Intermediated model – this model is like our current system from a market structure perspective. In this, banks would distribute CBDC to their customers and execute the functions of customer on-boarding and transaction monitoring, including AML compliance. The commercial bank would manage the records of their customers’ holdings, holding an identical amount in aggregate form at the central bank. The main drawback of this model is the risk to end customers. If the bank fails, it would likely take some time to give customers access to their money again. Their funds would be safe – the CBDC is always a claim on the central bank, but the only way to access it would be via an intermediary.

3. Hybrid model – this model enhances the intermediated model by having banks hold each customer’s CBDC balances in separate accounts at the central bank, thus making it easier to give consumers access to their money again if their bank fails.

In what form is the CBDC held?

A second question is around what form the CBDC is held in. There are two alternative models that are being explored: ‘accounts’ and ‘tokens’.

This is a topic that I sometimes feel is commonly misunderstood as a result of the technology being kept too far away from the business discussion. In principle, the question is simple: should the system rely on ‘accounts’, which have ‘balances’? Or, should we seek to emulate physical cash, where a consumer’s holdings are determined by the summation of the various physical coins – also known as ‘tokens’ – they hold in their wallet? In this scenario, we’re encouraged to imagine a digital ‘wallet’, that contains digital ‘tokens’ that can be transacted person-to-person and without the need for a central database of balances.

The problem, at least to me, is that these two approaches are often set up as being in opposition, as if one approach can solve only one set of problems, and the other being limited in some other way.

However, what I often discover is that the question really being asked, if only by implication, is: to what extent should individuals be able to pay each other without the transaction having to be approved, or recorded, centrally? In other words, the debate around ‘accounts’ versus ‘tokens’ is actually a disguised debate about privacy and how ‘cash-like’ a CBDC should be.

What should be the ‘relationship ownership’ role of commercial banks?

In part one above, we saw that, in two of the three models being contemplated, commercial banks (or, more broadly, ‘payment initiation providers’) have a central role: they identify their customers, issue them with ‘wallets’, and intermediate on their behalf with the central bank.

However, an open question is: how much power do we want these intermediaries to have? For example, should my bank be the sole party who can give me access to my funds? Or should I be able to access my funds via any bank that is able to verify my identity to the appropriate level? This seems like an arcane question, but it has fundamental implications for the roles, power, and business models, of the incumbents.

What does this all mean for the road ahead?

In the very immediate future, not much. CBDCs are not going to enter mainstream adoption tomorrow, or the week after, and we will not be suddenly paying for goods and services with digital currency in one big bang moment.

And, as I hope I’ve demonstrated, this is not only because this level of change is hard; it’s because some fundamental policy questions still must be resolved.