His comments came during R3’s annual CordaCon event, attended by over 1,100 developers, business leaders and industry experts in the heart of London’s financial district. The event drew a significant increase on previous years.

Since inception four years ago, R3 has risen to become a key player in blockchain-inspired technology to enhance a range of business processes including trade finance, insurance and financial services. R3’s global blockchain ecosystem has now grown to over 350 companies.

Among the announcements at CordaCon included a strategic partnership with Accenture and SAP, for R3’s Corda platform to enable two of the tech industry’s major players to provide a real-time gross settlement token-based exchange, with instantaneous settlements to reduce friction throughout the transaction chain.

Mr Rutter added: “Traditional business models are under threat across the full value chain. We will see the continued convergence of traditional Financial Market Infrastructure and broker businesses such as SIX, NY Stock Exchange, and Nasdaq with the crypto exchange world, such as Coinbase and Binance. We’ll also see new players emerge and the nimblest will win.”

Many of R3’s early adopters were at the event to talk about the work they are doing on Corda—such as TradeIX with Marco Polo, CryptoBLK with project Voltron, The Institutes Risk Alliance, SDX, B3i and ABI Lab to name a few.

Mr Rutter is a financial services veteran, having served as CEO of ICAP’s electronic broking division, before forming R3 and US treasuries platform LiquidityEdge, in the process of being acquired by MarketAxess in a USD 150 million deal

Mr Rutter added: “Corda’s longer term product strategy includes delivering capability on settlement and value transfer because we fundamentally believe we are embarking upon the beginning of a ‘tokenization of everything’ era. Digital Assets or tokens will reimagine how value is moved and managed and will fundamentally change the nature of business.

“Security tokens are squarely now under the purview of the regulators and will fall under global securities regulation. I believe long-term success and sustainability of tokens must rely on compliance with key principles pushed by the maturing regulatory framework. We will need a strong, well balanced ecosystem, regulatory framework, innovative mindset, and know-how from existing market infrastructure, as well as the right enterprise technology.

“We expect to see further enterprise blockchain consolidation. A year or two ago there were dozens maybe more platforms aspiring to be enterprise blockchains and we are already down to two real contenders in Corda and Fabric, with many other still trying to make Ethereum work at scale with proper privacy protections.

“On Interoperability, as applications go into production the need for seamless interoperability becomes more evident, so the surviving platforms need a rock solid interoperability story. I believe what we call “business network operators” the solution providers and of course their customers know that there won’t be just one solution for say Trade Finance so being able to send obligations to other customers on other BNO becomes an absolute necessity.

“The second order of this would be interoperability between blockchains and I think I was first asked about this over four years ago and the story for me is the same. While I think that may be important over a longer time frame it’s not a next year crucial deliverable.  And for us anyway we are just looking to further solidify our interoperability story and I am pleased we have been focused on this for some time now.”

The Corda development community continues to build awesome new CorDapps harnessing the best of Corda. Do check out the latest addition, Parnika Sharma’s (BCS Tech) property listing CorDapp which showcases the power of an RDBMS running on a distributed ledger. We’ll be adding this to the growing list of Corda samples soon.

Meanwhile Corda 4 and Corda Enterprise 4 is taking shape, and a sneak peek at the content reveals a host of compelling new features and further improvements to the developer experience: contract constraints are a part of how Corda manages application upgrades and we’re adding the ability to constrain to any attachments signed by a specified set of cryptographic keys.

This is an easier constraint method to use and requires less choreography between node administrators; support for multiple Corda nodes behind a single firewall, part of the strategy to reduce hosting costs; hardware security module support for safeguarding node cryptographic keys; a more consistent developer experience across the code (for example, error logging and the command line interface); improvements to the administration of a node’s membership to a Corda network, and – of course – we will be maintaining our high bar for the standard of documentation with further improvements to make it better than ever. 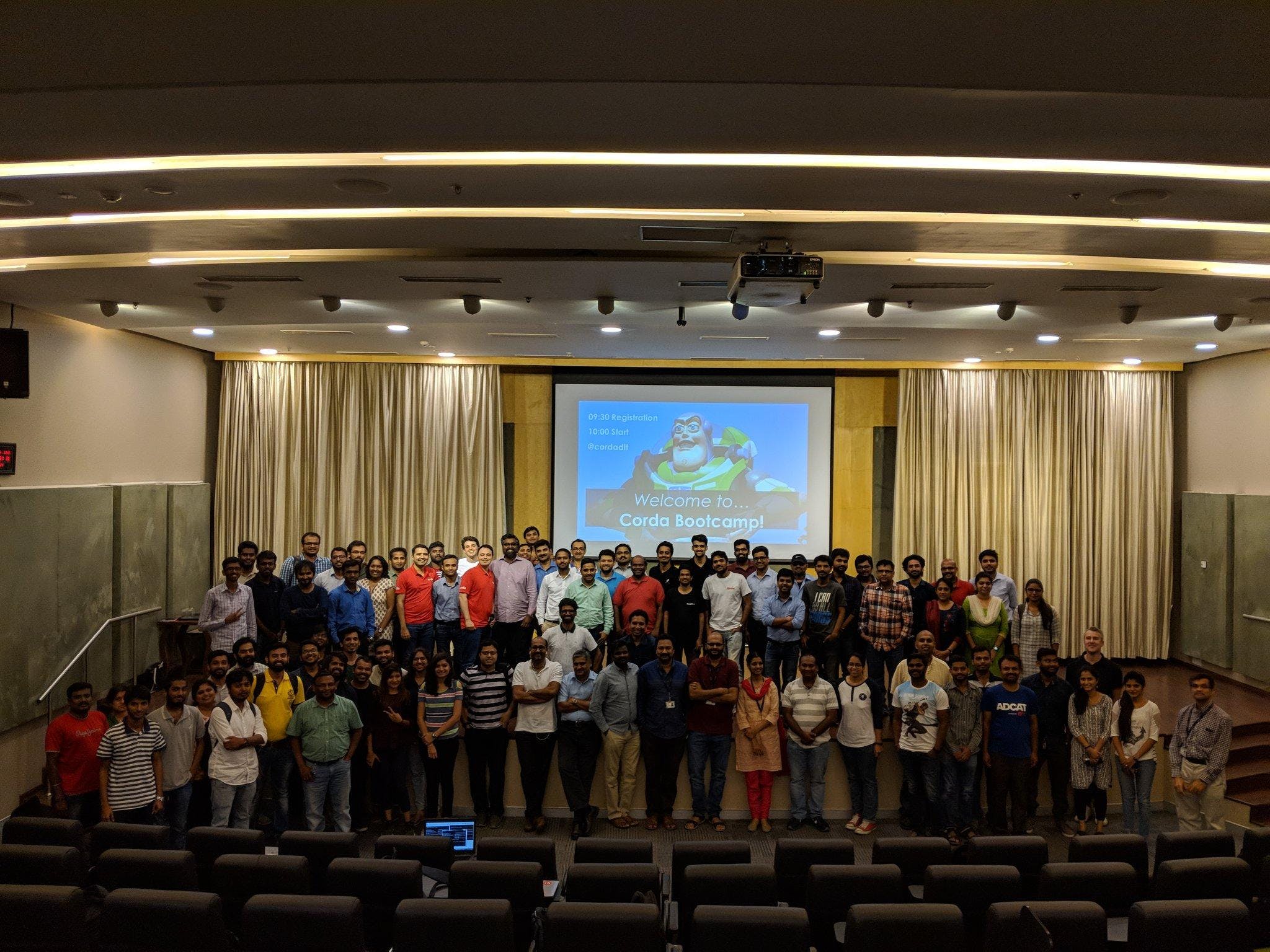 R3’s Corda developer relations team is back on the road! Building on their massively successfully Bootcamp events held in major cities around the world earlier in the year, the team will be stopping off in more global locations in October to help you learn more about (and get the most out of) Corda.  Do take a look at the list of Bootcamps in the Upcoming Events section below to register for your nearest city and join our Corda experts for a no-cost evening of hands-on training, where any developer can arrive with their laptop and leave with a CordDapp. 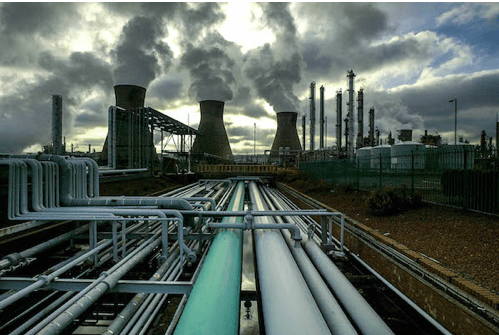 In energy, R3 responded to the US Senate hearing regarding the energy efficiency of blockchain technology. The article in Brink, “Bitcoin is a Red Herring in the Discussion of Blockchain Energy Efficiency”, found that blockchain could aid the integration of smaller suppliers into the energy grid and enable provenance tracking of renewables.

Life in the Fast Chain 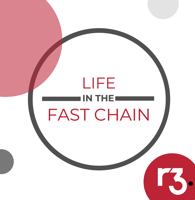 Have you listened to our blockchain podcast yet? Check out our latest episode (online, iTunes, Spotify, Google Play, Overcast, etc) with Impact Chain Lab’s CEO and co-founder, Aishwarya Balaji. Aishwarya comes on to discuss how she got into the blockchain space, her company’s goals, their new project Bystander, and more.

If you haven’t listened to our last special, check it out! This special episode features R3’s Mike Hearn who talks about the Corda platform, the Corda network, his vision for the future of Corda and the potential future intersection of the blockchain, IoT, AI, and other emerging technologies.

To stay tuned, be sure to check out the podcast on your favorite app!

Certification can be obtained by passing the Corda Certification exam with a score of 75% or better. If you have attended a Corda developer training session or have equivalent experience, you should be well-equipped to take the exam with some additional independent study.

Developers who pass will receive an invitation to claim a digital badge that can be shared on social media and with the developer community at large.

Ready to take the exam?

R3’s annual flagship conference kicks off this week in London, bringing together hundreds of developers, business leaders and blockchain engineers.

If previous years are anything to go by, the content will be fantastic – real examples, real case studies, knowledge sharing for developers, issue analysis and discussion and engaging presentations.

CordaCon provides a unique opportunity to meet and hear from R3’s clients about how they are leveraging Corda to solve real-world business problems.

The event, now in its third year, has consolidated its reputation as the fulcrum event for professionals working to apply blockchain-inspired technology to their sectors.

This is in part due to R3 having attracted a critical mass of members and partner, but also because the team’s approach was right from the start.

Rather than build an off-the-shelf blockchain solution and take it to market, R3 worked tirelessly to bring together the leading thinkers from their respective markets with the best developers and software engineers.

The resulting technology, Corda, was launched earlier this year and dozens of CordApps are being developed for it.

Such was demand that this year’s CordaCon was oversubscribed several times over. R3 and Chatsworth will be live tweeting from the event and sharing content and updates as they arise.

Look forward to seeing you there!