To make sure there is always someone on the other end of a sell or buy order, exchanges need constant liquidity. A traditional exchange incentivises such liquidity by rebating those who provide bids and charging those who accept them. This has been the traditional pricing model of exchanges until inverted exchanges arrived.

On an inverted exchange, the opposite is true. It charges those who provide bids and rebates those who accept them. It has been suggested the price of the original share rises greater (information leakage) in this model when compared to the traditional model of charging them.

An in-depth study by leading algorithmic trading provider, Pragma Securities, put this hypothesis to the test using their own randomised algorithm, they concluded that using an inverted exchange does not affect the price of the original share when compared to the traditional exchange pricing model.

Markets have become increasingly regulated, competitive, and complex and this has led to the rise of inverted exchanges. This pricing model reverses the traditional and offers a rebate to liquidity takers and charges liquidity providers. As brokers are keen to reduce costs wherever they can, this new model has become very popular since its inception, with Nasdaq, NYSE, and BATS providing their own inverted exchange.

Pragma’s 2010 study on ‘Inverted-Price Destinations and Smart Order Routing’, revealed the extent to which these destinations were popular. Inverted exchanges consistently captured the inside quote when compared to traditional exchanges, even though these platforms had significantly less liquidity and market share. Orders on inverted exchanges effectively hop the Intermarket queue and have a higher probability of fill, lower adverse selection, and ultimately less shortfall relative to the arrival of the child order.

With all these known benefits, it has been suggested that the presence of orders on inverted exchanges reveals more information about the strategy of the buyer, consequently increasing the price of the original share when compared to posting an order on a traditional exchange. 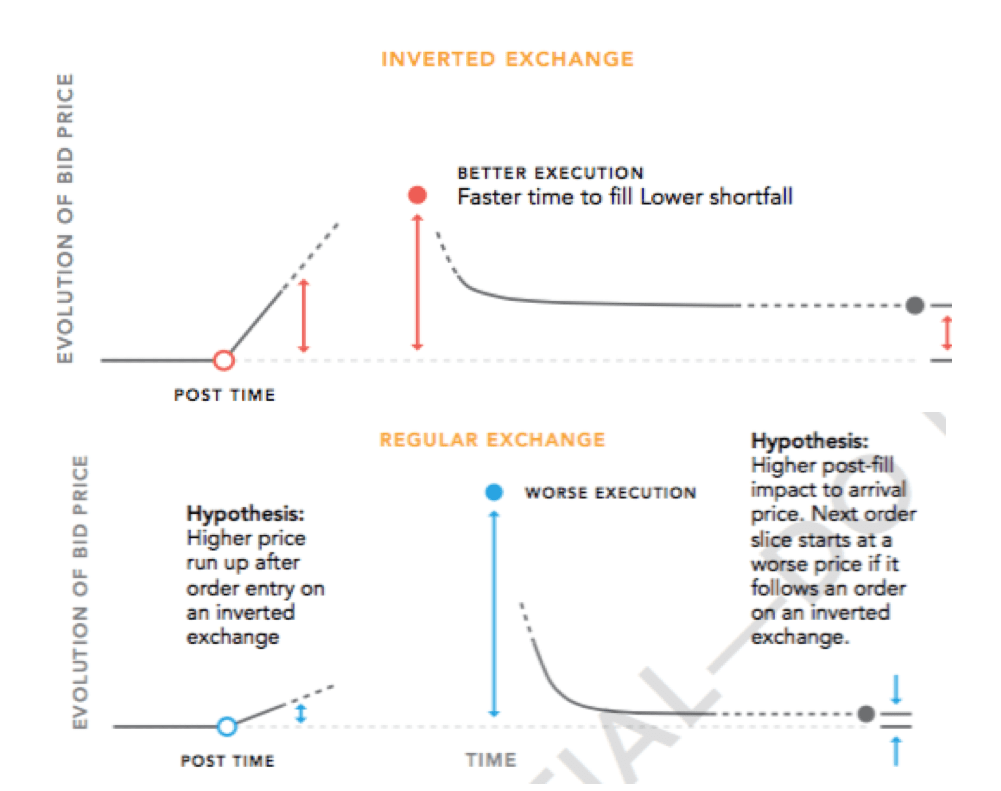 The suggestion has ‘inherent problems’

A recent report by Pragma investigated the merits of this notion. In their study ‘Inverted Exchanges: Higher Leakage or Higher Quality’, Pragma stated that previous research on this question used Open Market Data (TAQ) has ‘inherent problems.’  Previous researchers forget the motivations of market participants when they use an inverted exchange. Such participants use a costly exchange when they believe the price is about to run away and therefore quickly want their order filled before this happens. Unsurprisingly, the price return of a new order is higher than on a normal exchange. As the report strikingly puts it, ‘saying that posting on inverted causes the market to move is like saying umbrellas cause rain.’

Ultimately, we cannot make any presumptions about the execution quality of inverted exchanges with the data that typically has been used to make that case. However, we haven’t so far proven whether inverted exchanges do the opposite.

Join us in the next part of this study, where we will show why inverted exchanges do provide better execution quality.