As investors start to wind down their activities in November to prepare for the fast-approaching holiday season, volumes were down across all platforms with the exception of Fastmatch, which saw volumes rise for the first time in five months.

EBS reported a 1% decrease in spot FX trading activity, with volumes dropping from $88.7 billion in October to $81.6 billion in November. On a year on year basis, volumes saw a 0.5% drop.

Refinitiv’s spot FX volumes shrank 4.3% both month on month and year on year, recording an ADV of $90 billion in November.

Fastmatch reported a rise in volumes in November for the first time in five months. Its volumes saw a 5.7% increase from October to $20.3 billion and a 12.8% increase when compared to the same period last year. A promising sign for the firm following public difficulties in 2018.

Cboe FX experienced a drop with spot volumes decreasing by 5.5% from October to $34.6 billion. Year on year growth was 1.8%.

FXSpotStream continued its strong performance, recording a higher ADV than Cboe FX (formerly Hotspot) for the first time in its history. Its ADV in November was $35.5 billion – down marginally from October but up an impressive 61.1% year on year.

CLS reported a spot FX volume of $455 billion, representing a 4.3% decrease from the $471 billion reported in October.

As reported in FX Week, the Global Foreign Exchange Committee met at the end of November in Paris to provide an update on progress so far. It plans to publish the findings of the cover-and-deal and disclosures working groups in 2019 – something to keep an eye out for as the Code gathers momentum.

Three British traders were acquitted of using an online chatroom to fix prices in the $5.1 trillion-a-day foreign exchange market. Galen Stops, editor of Profit & Loss pondered whether a jury outside of financial-friendly New York would’ve came to the same conclusion in an opinion column in November.

On November 2, 2018, CME Group completed the acquisition of Nex. The company estimates $200 million in run-rate cost synergies annually by the end of 2021 from this buyout.

As reported in Reuters, leading electronic market-maker XTX Markets said it had chosen Paris as its European Union hub after the UK exits the bloc so it can continue to trade across Europe after Brexit.

Tweets of the month

So, the sterling experienced a bit of volatility in November… 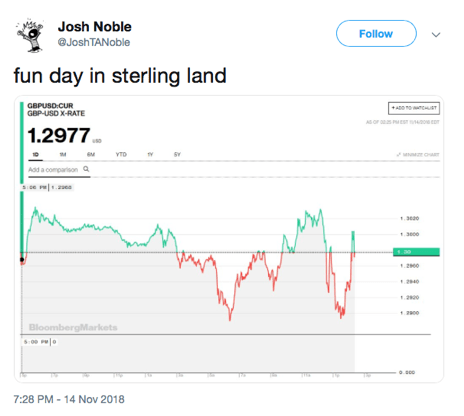 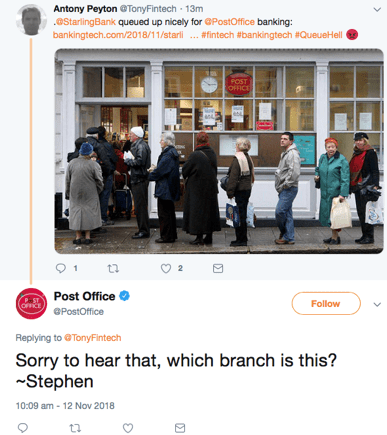