Greenwich Associates has published an interesting report covering the changing nature of liquidity provision in the global foreign exchange (FX) market, as well as the impact of macroeconomic and regulatory factors in driving a market structure evolution.

However, despite the growth of competition from non-bank liquidity providers and the challenges posed by incoming regulatory requirements, interviews with over 1,600 top-tier foreign exchange users globally found that the world’s largest dealers are expected to continue to play a major role in facilitating FX trading.

The rise of electronic execution and the subsequent decline of voice brokerage was also striking, with a 32% jump in buy-side trading handled by multi-dealer trading platforms and a 50% reduction in phone-traded volume since 2008. These changes contributed to an overall growth in electronic trading, which now accounts for 73% of all FX volume executed annually.

In line with the growth of electronic trading, a jump in the adoption of FX algorithmic trading amongst the hedge-fund community was particularly notable. From 2014-15, automated execution amongst this group of traders almost doubled from 33% to 61%; in contrast, the growth in adoption rates for fund managers and pension funds showed a mere 5% rise over the same period. 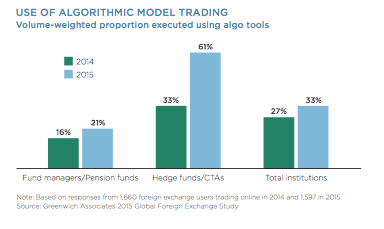