“Retail forex crowd positioning in GBPUSD may be the clearest example of emotions dictating trading decisions, rather than objective analysis, that we’ve noted to date. The GBPUSD recently broke the downtrend from the late-January highs, and retail traders, who were already short, chose to double down: they stepped up their shorts to their highest level since 2002.

“With the SSI ratio now at -8.15, there still is the threat of capitulation by shorts to prompt a short covering rally, driving the GBPUSD even higher. We retain our bullish bias as the 2014 high at $1.6670 looks increasingly vulnerable. Equity market weakness could help further support the Sterling versus the commodity currencies as well.” 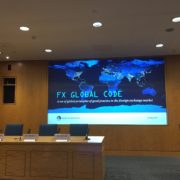 London’s leading position as a USD 2.2 trillion hub for FX trading would be harmed by a…