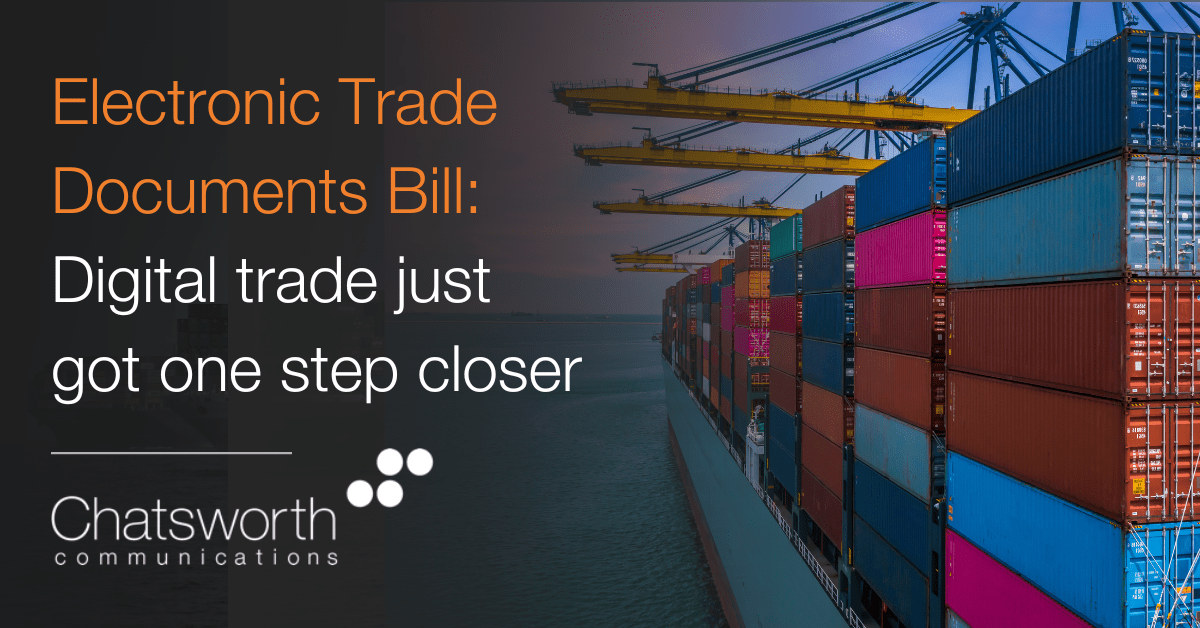 On 12 October 2022, the Electronic Trade Documents Bill was presented before parliament. It’s seen as the next step in a long road towards transitioning away from the country’s reliance on paper-based legacy systems for trade documents. So, with the bill now set to go through the House of Lords before heading to the House of Commons, what does it mean for the future of trade and digitalisation?

What is the Electronic Trade Documents Bill?

The past few months have been a turbulent period in UK politics. Amidst a new head of state, three prime ministers and two Conservative Party leadership contests, it’s been admittedly hard to keep up. But during these uncertain times, an incredibly important piece of legislation has been introduced to parliament – the Electronic Trade Documents Bill.

Under current legislation, such as the longstanding 1882 Bills of Exchange Act and the 1992 Carriage of Goods by Sea Act, most business-to-business documents like bills of exchange must exist on paper to be legally recognised. For centuries, paper-based documentation has been the standard and accepted way for enterprises to transact with one another.

The Electronic Trade Documents Bill changes this as it makes digital documentation recognised legally. And once passed, the bill will provide the framework for businesses to move into a digital-first trade environment.

Why is the bill important?

Since the onset of the Internet, digitalisation has sped up rapidly. Every day – whether it’s with work colleagues or friends – we talk to each other digitally. Email, Slack, Teams, Zoom, text, Whatsapp – you name it – paper-based ways of communicating have wilted in the face of new technology and apps.

Except in trade, where paper documents are still standard practice. The introduction of the Electronic Trade Documents Bill marks a significant moment in the shift away from paper and is set to facilitate much-needed digitalisation.

This is a big deal. The UK’s trade sector is worth a whopping £1.4 trillion, with over 28.5 billion paper trade documents printed and flown around the world daily. Paper documents can take days, or even weeks to process. This prolongs settlement times, adds red tape and administrative burdens and ultimately holds back many firms from engaging in commerce and growing their business.

Digitising these paper documents can bring enormous efficiency benefits by cutting the processing time of trade documents to as little as twenty seconds. Removing the legal obstacle to electronic versions of trade documents will significantly lower administration costs and is expected to provide a £1.14 billion boost to UK business over a ten-year period, according to Trade Finance Global. Likewise, the Digital Container Shipping Association estimates that if 50 per cent of the container shipping industry adopted electronic bills of lading, the collective global savings would be around £3.6 billion ($4 billion) per year.

Alongside these efficiency gains, digitising trade documents is also vital towards establishing a greener economy. Beyond the immediate environmental benefits that cutting paper brings to trade, digitalisation eliminates the need for couriers, in turn reducing carbon emissions.

The introduction of the Electronic Trade Documents Bill is likely to accelerate other global digital trade initiatives. Alisa DiCaprio, Chief Economist at R3, thinks that “on the global level, the UK effort contributes to the increasing volume of support for countries to align to UN Model Law on Electronic Transferable Records (MLETR) guidelines. The US has started this process with the Bankers Association for Finance and Trade (BAFT) promoting the updating of the eSign Act.”

The Electronic Trade Documents Bill will not initiate the digital transformation of trade overnight, as there are still some fundamental barriers and questions surrounding the transition towards a fully digital trade environment. For example, while the UK has taken a big unilateral step towards digitalisation, the widespread adoption of digital trading mechanisms will require other countries to follow suit in a co-ordinated global approach. Likewise, digitalisation inevitably throws up new forms of online security risks, which companies will have to make sure they have protective measures against.

But, there is no doubting that digital trade just got closer. By introducing clear legal guidelines for a digital trade environment, the bill represents a crucial step in enabling firms reap the enhanced efficiency and cost-reduction benefits that digitalisation can bring.