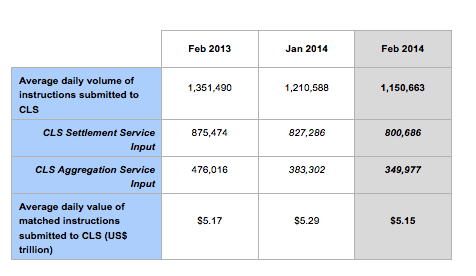 Input volumes are the number of instructions received by CLS on a given day for future settlement. Input instructions are not necessarily settled during the month in which they were submitted.

Note: CLS reports both sides of an FX transaction. To adjust the average daily value data to equate to the same reporting convention used by the Bank for International Settlements and the semi-annual foreign exchange committee market reports, the gross values should be divided by two.

In January 2013, CLS recalculated its monthly data, resulting in non-material changes to volume figures by an average of 0.5%. The data above reflects this calculation.